Welcome to the second installment of The Pintester Movement.
Sonja Foust, aka ,The Pintester, has issued a challenge to try out one of the Pinterest pins she has (mostly) screwed up.

So, this is a place with a soft landing for those of us who are craft-challenged, yet willing to try making some oddball stuff because we’re all, well, I’m not quite sure what we are.

Since you’re reading this, you fill in the blank and get back to me on that, eh?

Just in case you missed the first challenge when all the pins of Pinterest were up for grabs, I tried tieing a Monkey Paw knot. It turned out better than I could have hoped. I mean, it actually looked like it’s supposed to!

This time around, I’m going to see if I can make a drink called an Alien Brain Hemorrhage.

I saw this making the rounds on the internet last Halloween, but somehow I just never quite got around to trying it.

So, I just ran out of excuses. Beside, I never know when I’ll need to know how to whip up an alcoholic beverage that looks too disgusting to drink. Then again . . .

Off I go to the liquor cabinet. And as I root around, I’m left wondering who in the hell stocked this thing in the first place?

I’m pretty sure the garden gnomes have gotten into the house and have been partying in the liquor cabinet. That’s my best explanation for what I found in there.

I did manage to find a fairly close approximation of the ingredients involved, though. The recipe calls for peach schnapps. Well, I have raspberry, so I’m good there.

Next on the list is Bailey’s Irish Cream. Er, scratch that. But I do have a bottle of Sahnelikör mit Scotch Whisky. Just in case your German is a bit non-existent, that means it’s a cream liqueur with Scotch, but I think the umlaut makes is sound way cooler than it does in English.

Alrighty then, on to the grenadine. But, wait. Nope, I’ve never had any of that stuff. But, I do have some Swedish Fish-flavored vodka that I made when I was inspired by another Pinterest pin. Hey, it’s red.

Now we’re off to what I’m sure would be a Pintester-approved start because I have substituted all of the ingredients for something else. How could this pin possibly fail?

I assembled the ingredients.

I poured the raspberry schnapps into the glass, like so.

And now for the interesting part. You’re supposed to pour in the Irish cream slowly. Somehow I don’t think they meant that it was supposed to be quite this slowly.

Hey, I just opened the bottle.

Maybe it’s like honey and will soften up with soak in hot water. 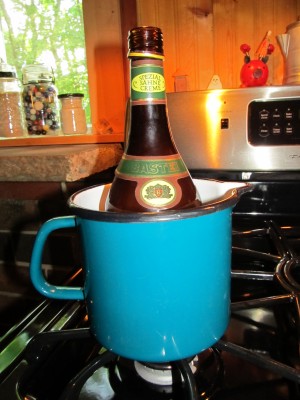 Nope. Looks like we’ve had this stuff for waaay too long. It’s definitely a hard case.

So, off I go to the handy dandy local liquor store. Have you priced Bailey’s Irish Cream lately? Being as I’m Scotch, as well as Irish, I’m going with the bargain booze.

So, now, where were we? Oh, yeah. Slowly pour the Irish Cream into the glass, add a couple of drops of Swedish Fish vodka and, voila, it looks just like. . .

Maybe it looks like brain tissue in a laboratory, but it sure ain’t the Alien Brain Hemorrhage as promised. But I’m not gonna let a little thing like that stop me from drinking it, though!

Wow, it didn’t taste bad at all. Like raspberries and cream, with a touch of Swedish Fish. Worked for me.

Nothing like a double shot in the middle of the afternoon to get those creative juices flowing, eh?

This was a big ol’ fail. But, on the upside, I have a nice bottle of Irish Cream to play with. I’m thinking there’s an adult Creamsicle recipe out there with my name on it.

There's so much interesting stuff out there that just flies under the radar. Until I read about it, that is, and then I just have to share the wackiness.
View all posts by Linda Childers →
This entry was posted in Food for Thought, Just Plain Interesting and tagged beverages, brain hemorrhage, cocktails, pinterest, pintester. Bookmark the permalink.

20 Responses to Ow, My Brain Hurts!